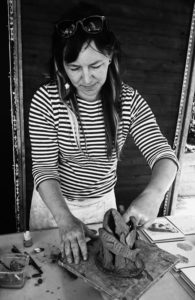 Imogen Charleston is a multidisciplinary artist and educator based in Christchurch, Dorset, UK.

Growing up on the Dorset coast with a very creative family, Imogen was encouraged to draw, play with clay and make music from an early age. After leaving school she gained a BTEC in Art & Design from Bournemouth & Poole College of Art (now AUB). She then went on to study electronics, before returning to art again, completing a BA in Applied Art & Design in 2012 where she specialised in glass and ceramics.

She was co-founder and puppeteer with The Paper Cinema, who have toured their live animation shows internationally since 2004.

Imogen produces a range of work in porcelain. She utilises a variety of methods to create her forms which are either hand built or slip-cast. More recently Imogen has begun to produce bespoke lighting, harnessing the natural translucency of porcelain. These aesthetics are also used to produce smaller wearable pieces and tealight lanterns which are available to purchase via Etsy.

Imogen has been a tutor for 15 Days in Clay since 2013. Founded by artist Janna Edwards, they provide the opportunity to adults with physical disabilities and specific learning needs to work with clay and be creative in their own right. All aspects of the making process right from initial drawings to finished fired work, while supporting each student individually. There is usually at least one collaborative exhibition of their work each year.